1. Studies of the interactions between TOR and DYRK kinases and evaluation of their role in the control of growth and lipid synthesis in plants and algae

This project funded by the French National Research Agency (ANR) aims at removing the biological lock that forces microalgae to block their growth when storing large quantities of energy molecules, so that growth and storage become compatible.

Several approaches, carried out independently in recent years by teams from the Aix-Marseille Institute of Biosciences and Biotechnologies (BIAM), have shown that certain major regulators of their cellular functioning, the protein kinases, govern this balance between growth and accumulation of reserve lipids. Now that the lock has been identified, it is necessary to understand all the gears.

Unveiling the fine mechanisms at the heart of cells

Based on these discoveries, the TOR-DYRKcontrol project will go further by using biochemical and genetic approaches to understand how these different kinases interact with each other at the heart of plant and algal cells to finely regulate growth and lipid storage. BIAM’s LGBP and EBM teams have teamed up with a team from INRAE (Institut national de recherche pour l’agriculture, l’alimentation et l’environnement) for its expertise in plant and microalgae genome editing to modify these signaling pathways as finely as possible by integrating their latest discoveries in plants. 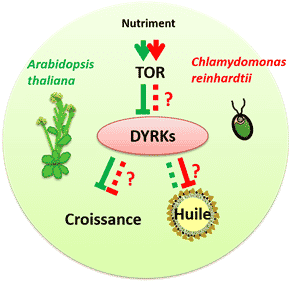 Figure 1: The regulatory network involving TOR and DYRK kinases links nutritional status to growth and accumulation of reserve lipids (oil), a source of biofuel. The green lines correspond to the results obtained for the model plant Arabidopsis thaliana and the red lines to the results obtained for the microalga Chlamydomonas reinhardtii. Solid lines indicate known steps, while dashed lines correspond to steps that are not fully understood.

The objective of this research will be to develop solutions to increase the accumulation of lipid reserves without compromising the growth of microalgae to improve their productivity and facilitate their use in the development of 3rd generation biofuels.

2. Understand the photosynthetic mechanism of light acclimation and develop new tools for the fight against global warming

The objective of the RevelOrg program, funded by the French National Research Agency, is to reveal (Revel) the mechanisms of photosynthesis acclimation by a comparative approach between photosynthetic organisms (Org), from phytoplankton to terrestrial plants.

To understand the mechanisms of photosynthesis, the Institute of Bioscience and Biotechnology of Aix-Marseille (BIAM) and the Institute of Integrative Cell Biology (I2BC) are working together in the framework of the RevelOrg project, in a comparative approach of three different photosynthetic organisms (cyanobacteria, algae and plants). We will unveil their acclimatization mechanisms in response to different light intensities whether they are terrestrial or aquatic, freshwater or saltwater. 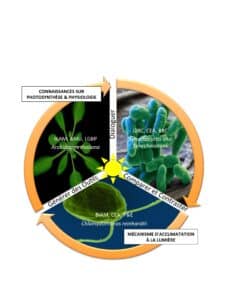 This fundamental research project will detail the molecular function of photosystems that increase electron transfer in strong light and thus also CO2 capture. This will allow us to better understand the constraints exerted by the environment in the context of climate change. This research could, in the future, open up certain opportunities to improve the process of CO2 capture by photosynthetic organisms. The interest would be to be able to enhance this process both in the area of bioenergy development and to improve agricultural yields.

Producing biofuel precursors or reserve lipids (TAGs), without compromising the growth of microalgae

The SIGNAUX BIONRJ project aimed to study how the manipulation of stress and energy signaling pathways can enable the increase of biofuel production by photosynthetic eukaryotes and in particular microalgae.

The development of renewable energies is a major challenge for our society while the accessibility of fossil fuels is limited and the problems related to climate change are worsening. Third generation biofuels are a promising solution because they are based on photosynthetic organisms that transform solar energy into chemical energy during photosynthesis, a process that captures atmospheric CO2. Microalgae are particularly interesting because they do not compete with agriculture and produce reserve lipids, triacyglycerols (TAGs), which can be transformed into so-called 3rd generation biofuels. However, several technological and biological barriers limit the industrial production of biofuels by microalgae. From a biological point of view, productivity is limited by the fact that the highest concentrations of TAGs are obtained under conditions of nutrient deficiency (nitrogen limitation in particular) which blocks growth and limits yield. The idea of SIGNAUX_BIONRJ is that manipulation of stress and energy signaling pathways could increase TAG accumulation without compromising growth and thus improve the yield of 3rd generation biofuels.

In order to understand the evolution of signaling pathways in algae and plants, we conducted our study in highly divergent algae and plants: diatoms and mosses. We focused our study on the cytosolic protein kinase TOR (Target Of Rapamycin) signaling pathway which is conserved in all eukaryotes including humans and the ppGpp signaling pathway (mediated by guanosine penta- and tetraphosphate nucleotides) in chloroplasts. Due to the high conservation of the TOR protein, we were able to use selective inhibitors of this kinase developed in oncology and which we have shown to be effective in inhibiting this kinase in plants and algae and to study its role. Concerning the ppGpp pathway, we have developed systems for the controlled induction of an enzyme inducing the synthesis of ppGpp in chloroplasts. These tools allowed us to study the role of these two signaling pathways by physiological, biochemical, lipidomic and proteomic approaches.

We demonstrated that a manipulation of TOR kinase activity can lead to an improvement of TAG productivity in a microalga, compared to nitrogen deficiency, which was the main objective of the project. This progress towards a biotechnological application will probably require to further improve this productivity by playing on specific sub-elements of this signaling pathway. We observed a more complex situation for ppGpp where its accumulation leads to a transient accumulation of TAG within a lipid droplet in a diatom and then to a decrease in TAG accumulation.

The characterization of conditions allowing TAG production without compromising growth would help to remove an important barrier for the development of 3rd generation biofuels. Following this project, experiments in large-scale microalgae incubators could be developed.

4. Stress acclimation mechanisms mediated by the conserved (p)ppGpp signaling pathway in the chloroplast

The stringent response is a general stress response pathway conserved in prokaryotes, and is orchestrated by the nucleotides guanosine pentaphosphate and guanosine tetraphosphate (abbreviated as (p)ppGpp here). Conserved enzymes required for (p)ppGpp synthesis are also present in photosynthetic eukaryotes, and this is a consequence of the cyanobacterial origin of the chloroplast. In bacteria, (p)ppGpp plays a pleiotropic role in coordinating growth in response to environmental changes. (p)ppGpp represses the synthesis of macromolecules involved in proliferation (proteins, RNA, DNA, fatty acids and phospholipids), and conversely activates general stress response pathways. In plants, (p)ppGpp synthesizing enzymes of the RSH family (for RelA/SpoT Homolog) are localized in the chloroplast, and (p)ppGpp is detected. We recently showed in vivo in Arabidopsis that (p)ppGpp was an inhibitor of chloroplast genome expression, and that RSH enzymes regulated (p)ppGpp homeostasis to control chloroplast functions and to influence growth and development. However, we know little about how RSH enzymes are themselves controlled, and we do not know the nature of (p)ppGpp targets in the chloroplast, nor do we know the role of (p)ppGpp in response to stress. Furthermore, little is known about the function of this signaling pathway in different photosynthetic organisms.

The objectives of the project are:

To elucidate the molecular mechanisms and regulation of (p)ppGpp synthesis in the chloroplast of plants and unicellular algae.

To understand the role of (p)ppGpp in chloroplast function and adaptation to stress.

We will use innovative molecular genetic, biochemical, and omic approaches to study these questions in the two model organisms Arabidopsis and Chlamydomonas. The prior expertise of the partner laboratories in the subject, the existence of strong preliminary results and validated genetic tools, support the proposed approaches and will allow a rapid implementation of the project. This project will bring original and important results in the emerging field of the study of (p)ppGpp in photosynthetic eukaryotes. In addition, it will allow the strengthening and the emergence of a pole of expertise visible on a European scale, bringing together several laboratories in Marseille working on (p)ppGpp. The study of growth and stress response pathways in plants and unicellular algae is essential, as these organisms are responsible for about 75% of primary production on earth, and are essential to the supply of food and biofuel for humanity.